The New Year has only just begun and Nick Young from Two Ruffians is already having a big one - met with characteristic good humour... 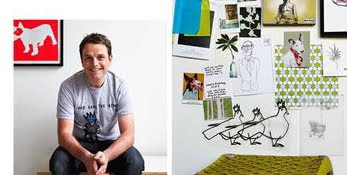 "What a few weeks... The shop's been flat out, both cars have broken down in the last week, and my dog's losing his hair."

"It will grow back (something to do with an operation he had a month ago.) If the wind blows he's a bit like a dandelion in the breeze. He turned a passer by into Chewbacca yesterday..."

Above, Nick Young as featured in the December issue of Home Beautiful.

The shop to which Nick is referring is one that he and partner Clair opened in regional Flinders, Victoria in 2010 (called 'Curio & Curio') on top of his already burgeoning design business, Two Ruffians, where he designs and makes pillows, tea towells, cards, clothing, cushions, art prints, bags and more.

Such is Two Ruffians' success that it came to the notice of national magazine Home Beautiful, in which Nick featured in a 3-page spread in December.

Not bad for someone who is (happily) self-taught, once describing himself as having "No training, No CV, No Hope..!"

Suffice to say Nick's success as a designer has come as a bit of a surprise to him, a Londoner who has made Melbourne his home for almost a decade. And as we all know success comes to those who least expect it (those who work hard, have talent and don't take themselves too seriously are are also serious contenders...)

Nick's eternal curiosity about the world - and irreverent sense of humour - has also helped make his designs stand out from the pack.

Which is why Stockroom loves them (cards, tea towells and tee-shirts sell madly), and why we have chosen Nick Young to feature in our 'Meet Your Maker' series...

Nick Young: I was reading a book called 'The New English Dandy' by Alice Cicolini. In the introduction it talks about the original dandys of 18th century London. That made me think of the old fashioned term, 'ruffian', which is the opposite to a dandy. I liked the sound of it, plus being self-taught means my printing techniques are probably a bit rough around the edges. So ‘Two Ruffians’ was born.

And also because there's generally more than one ‘ruffian’ working on the designs or sewing up stuff from time to time. 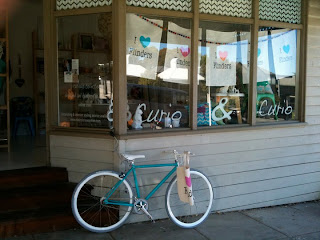 SR: What inspires your designs?

NY: At the heart of my designs are the sights and sounds of mid to late 90s Hoxton in London. I've never quite burst out of that bubble. I absorbed a lot of design inspiration from night clubs + bars in the east end of London, such as ‘The Blue Note’, ‘333’, ‘Bricklayers Arms’, and ‘Plastic People’ on Curtain Road run by my friend Adi.

Banksy stencils started to pop up around the East End at this time too – magic! I've also just started drawing new designs, that have no relation to this time in my life, but still have an urban, thought-provoking feel.

Also people like my best friends Ali (aliaugur.com) Phil (bespokebristol.co.uk) and my long time partner and buddy Clair (curioandcurio.com) have had a massive influence on the direction my life has taken.

SR: "No training, No CV, No Hope..!" Just how hard was it to break into the world of design?

NY: When I first moved to Australia 8 years ago, I started cutting out stencils on water colour paper and printing a few basic designs. I was determined to leave my old life in sales and marketing in London and start a fresh in Melbourne.

I used to talk about designing T-shirt's and clothing but I think most people thought I was mad. I knew that if I saw even the slightest chink of light, I'd run straight for it and wouldn't look back.

Clair was working as Real Living's Melbourne Style Editor, and I started assisting her. Basically I was the props boy, and although I really didn't enjoy rushing around Melbourne in a pre-shoot frenzy, I did get to meet a lot of shop owners and young designers, and it started to make the world of design feel a bit more accessible.

I bought some books, asked some questions and taught my self the whole printing process, from design to end product + web design. I'm exhausted just thinking about. A year ago I did the Mornington market. This year Clair and I opened a small shop called ‘Curio & Curio’ down the road in Flinders, next to the Flinders General Stores (Shop 4, 50 Cook Street, Flinders, Victoria).

It's been 3 years since I started to teach myself to screen print and 2 years since I picked up my first stockist. Now I've got my own retail store and quite few stockists selling my work - it's amazing.

SR: What are the advantages of being 'self-taught'?

NY: Being self-taught makes you fearless, there's no voice in the back of my head saying "you can't do that." Clair's been a big help recently, taking a more active role in the design process, including colour choices. She's worked as a interior stylist for 14 years, and has an art + textile background. I think this will make a big difference this year. Already I’m enjoying seeing customers positive reactions to our colourful designs in the shop.

Be patient and make lots of mistakes - you get it right eventually and that's it. Don't give up.

SR: What kind of design ambitions did you start out with, and have they changed over time?

NY: My ambitions have always been realistic to my ability. I've come a long way in 3 years. I'm ambitious and confident enough to believe that, with a bit of luck, I'll keep improving, so my designs will ultimately have a much wider audience.

SR: How do you go from a business-finance background into a full-time creative endeavour, the way you have? You don't just 'flick a switch' do you...

NY: When I was 16 I remember talking to the head of the textile department at school, because I knew I wanted to create, but she put me off. There was ‘no room at the inn’ when I approached the Head of the Art Department either. So I did Economics and Business Studies.

I considered doing business and fashion at Uni, but opted for business and finance, because I've always wanted to work for myself, and maybe didn't have the confidence to back myself as 18 / 19 year old. I thought that a bit of business and marketing knowledge would maybe come in handy one day.

For me the 'switch' was always there, it was just a matter of someone I didn't know (and wasn’t my mum, who always says my designs are great), liking something I'd done.

I'll never forget getting the call from Sal at LuLu in Balaclava, she'd seen my first 2 tea towel designs, and liked them enough to call me and stock them. That was it - the switch was flicked, someone I'd never met, paid money for something I'd done, because they thought they were good.

SR: What do you love most about your job? And your life?

NY: Being able to talk to people about what I do, with a happy soul. It sounds strange but for years I was always outside, looking in, as most of my friends have art backgrounds and creative careers.

Now I feel equal, and it's really cool.

SR: Two Ruffians designs really appeal to people. What do you think is the 'essence' of Two Ruffians' - what is it that people respond to in the work?

NY: They're fun and bold without taking themselves seriously. For example I generally find art galleries uncomfortable places. It often stops me enjoying the paintings, as I feel awkward in a gallery environment. Maybe this stems from my own insecurities as I hung out with creative friends in London. None-the-less I think that when I design I'm trying to make my work as unpretentious and approachable as possible.

SR: Do you have any heroes?

SR: How important is humour in your work?

NY: Everything's funny apart from sad things; so hopefully that's most things, as I'd hate to think that sad things are winning. I'd have to stop printing, no one wants to look at a print of a sad face. Just thought of a new design. Maybe they do! 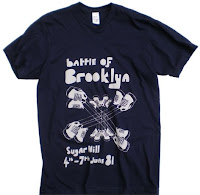 SR: How would you make the world a better place?

NY: I’d let the whole world know that it's cool to be kind...

And visit the Two Ruffians website. And you can follow Nick's tweets at Twitter #tworuffians and his blog, where you will find the Home Beautiful design feature.

Words: Megan Spencer. Many thanks to Nick Young for the lovely interview.

Posted by wolf at the door/Stockroom at 8:43 PM